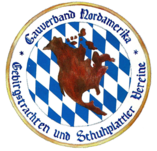 Over 100 Years of Tradition

“We honor the traditions and dress of our ancestors.”

Schuhplattler Verein Edelweiss was founded on April 16, 1914 by 26 Schuhplattler and Trachtler from the “old country,” mostly Bavarians, with a few Austrians included. The mission of the club was and still is to preserve and perpetuate the Bavarian and Austrian culture through the performance of authentic Schuhplattler and Volkstaenze (folk dances) and songs, while wearing traditional costume (Tracht). This was accomplished by providing the immigrants with a close-knit social network in their new home. Although none of our founders are alive today, they are represented by some of their second and third generation descendants who can be found in our membership today.

Much of our early history has been lost to us; only some names and a few stories are left. Over these many years, our club has survived some rough times and has gone on to prosper and provide many folks with wonderful friendships, long-lasting memories, millions of laughs, and more than a story or two for the children.

In 1974, we celebrated our 60. Jubiläum and Fahnenweihe (anniversary and flag blessing). It was one of our proudest moments. Over 1,000 of our Trachtenkameraden representing 24 Vereine (clubs) from around the United States and Canada attended the festivities. The B.G.T.E.V. D’Werdenfelser from Sheboygan, Wisconsin was our Patenverein (sister club). Our newly purchased and dedicated flag was a tremendous accomplishment for our Verein and our members are extremely proud of the beautiful flag.

Another special event in our history was the celebration of our 75. Jubiläum in May, 1989. At that time we honored several of our members for their 50 plus years of membership and commitment to the Edelweiss. The festivities included special performance by our dancers of a new skit of Platteln scenes.

In April, 2004, we celebrated our 90. Jubiläum with a dinner and dance at St. Catherine’s Church Hall in Glenview. Our adult and children’s dance groups performed, as did several of our guest Vereine.

In August, 2014, we celebrated our 100. Jubiläum and are excited to be the first club in North America of this kind to celebrate this great milestone. We were invited to join in the Munich, Germany Oktoberfest parade in September of 2014.

While many things have changed over the last 100 years, many things have stayed quite the same. We still have a very dedicated and loyal membership who enjoy many of the same activities our founders did.